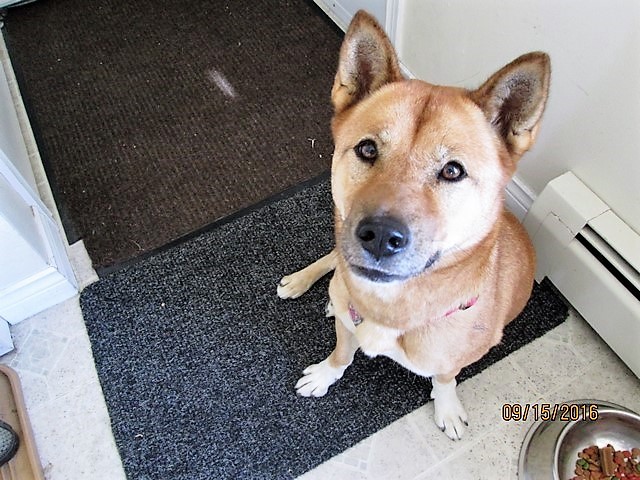 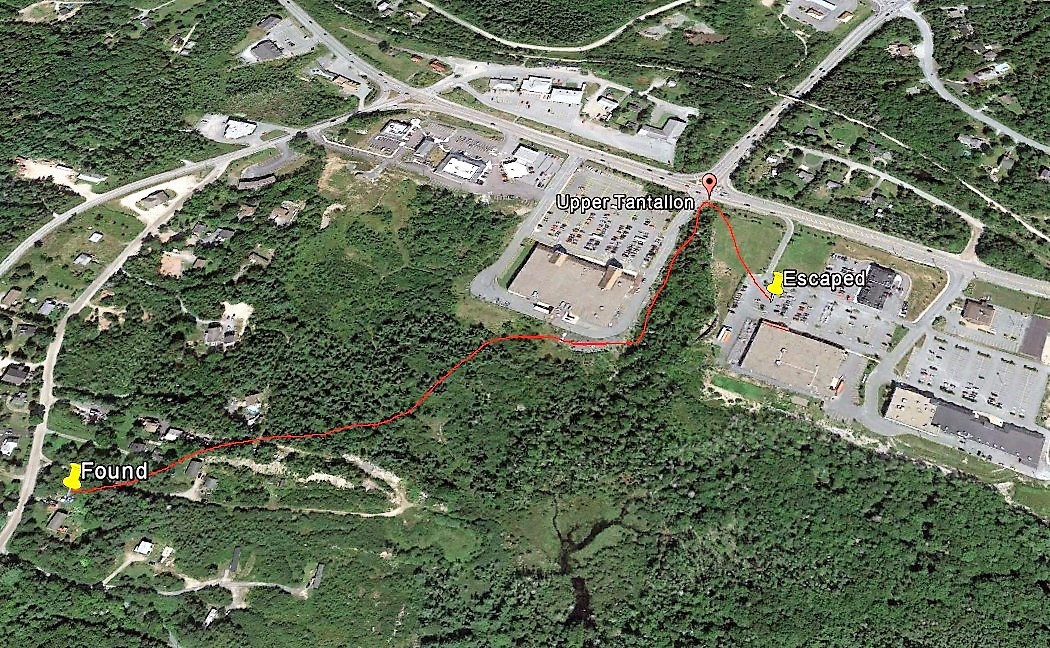 Copyright ©2010-2018 Queenidog - All Rights Reserved
How Fast Can You Run? I was putting something in the back seat and blocked the way of the dog. No matter: she found a hole and was GONE! She ran across the parking lot as fast as her little legs could take her, with 25 foot leash still attached. Barbara headed towards her direction, I took the car to try and cut Sunshine off as she approached Superstore. Between Can Tire and Superstore is a big gully that is heavily forested with underbrush and that’s the direction Sunshine took. We didn’t know exactly where she went when she got to that main point between the two businesses because we lost sight of her, so when we couldn’t spot her near Superstore, I started checking out other areas.Barbara was canvassing customers at Superstore, told Customer Service about the lost dog, and even showed Sunshine’s photo to 5 road workers. One lady at Superstore said Sunshine ran down behind the store but there was no sign of her.

Send Comments
First Clue Our Vet was close-by (and in the same direction Sunshine could be going) so Barbara stopped in there and was told that ANOTHER vet office much further north had a report from a gentleman who said he spotted her and tried to catch her. As it was, he spotted her behind the same Superstore so we followed him back there so he could give us more details. We were REALLY lucky because the guy had a sign on his truck indicating he was a dog-boarder, AND he worked at the Pet Shop we normally buy pet supplies from.

Send Comments
Unhappy Trails “Jim” went down to the gully telling us how he was 20 feet from Sunshine when she took off from him into the bush and he started heading down a trail, with us in pursuit looking for the dog. I was in dress shoes and had no hat or gloves since we were only going shopping. Barbara was no better dressed and despite my discouraging her from coming down the rocky and wet path, she insisted she would, because she wanted to find Sunshine. All three of us eventually got separated and when I returned down the path to my destination I was a little upset I didn’t come out to the same area. I was “sorta” lost but I saw houses through the trees, so I was not too worried. Jim and Barbara soon joined me.

Jim took off down another trail and I got into the car to meet him on the other side of the bush, at Peggys Cove Road, but none of us saw or heard Sunshine. Jim gave us his number and said if she was not found today, he would mount a search with some friends tomorrow morning. The concern of course was that Sunshine had her leash still attached and it could snag on the brush and trap her in the middle of nowhere. The temperature was about 0 C but it had started to snow and temperature was expected to drop overnight. It didn’t look good. Jim had mobilized a number of people using his cell phone, having them maintain a lookout and a watch on social media for our lost dog.

Dejected, we headed back home to get onto the Nova Scotia Lost Dog Network, make fliers, etc.. Just before getting onto the main road I figured, one last check going down the road  Sunshine could have come out on (just before Peggys Cove Road) since it was on the way. I put my 4-way flashers on and drove real slow when suddenly a little car pulls up behind me with flashing lights and honking horn.

“Are you looking for a dog?” the man asked.


Send Comments
Sunshine, our Ninja Sheba-Akita-cross escaped once again. This time it was worse than before because we were at Canadian Tire in Tantallon, 30 minutes from home.

Send Comments
What Took You So Long? We followed him to his place, a couple blocks up. He told us he saw this small brown dog trapped up at the top of a hill. He saw it had a leash on and thought maybe the owner had a heart attack because the dog was alone. Well he got the last part right, and ALMOST got the first part right! He tried to approach Sunshine but she was not letting him, so he left her there and reported the finding to our Vet who was only 2 blocks away. When Sunshine saw me approaching her she was all excited and happy. Not because she MISSED us or anything, it was because here was someone to get her untangled. She had wrapped her leash 3 times around a small tree and the leash handle mechanism was lodged between some bigger trees. So we were right that the leash would catch somewhere. Thank God it was near habitation where this man spotted her.

Send Comments
As soon as I got Sunshine untangled, she was totally unfazed and immediately continued her exploration of the area. I gave the man a reward which he refused 3 times. I asked, “Do you have a dog?” When he replied “yes”, I told him, “buy some treats and food for your dog”. With Sunshine safely back in the vehicle, we went to the two vets and the pet store where Jim worked to let them know the good news.