To learn more about this great scientist, go to the Caltech web site: http://www.feynmanonline.com/ 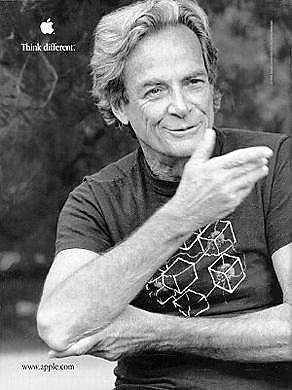 "To his colleagues, Richard Feynman was not so much a genius as he was a full-blown magician: someone who "does things that nobody else could do and that seem completely unexpected." The path he cleared for 20th Century physics led from the making of the atomic bomb to a Nobel Prize-winning theory of quantum electrodynamics to his devastating expose of the Challenger space shuttle disaster. At the same time, the ebullient Feynman established a reputation as an eccentric showman, a master safe cracker and bongo player, and a wizard of seduction."

Send Comments
After I read my first book by Richard Feynman I was hooked. He impressed me immensely with his writing style, down-to-earth explanation of difficult concepts, and most of all the way he did science. To me he represents the epitome of many great scientists, a Newton and Galileo, an Einstein and Bohr all wrapped up into one. I bought every book written by him and about him and was so thoroughly enthralled by this American-born scientist that I named and dedicated my own meager little lab in my basement to him.

Send Comments
I bought cassette tape copies of some lectures he did at Caltech, in 1961 and 1962. Listening to them in my truck when I went on long trips I managed to get an even clearer understanding of Physics than I ever had.